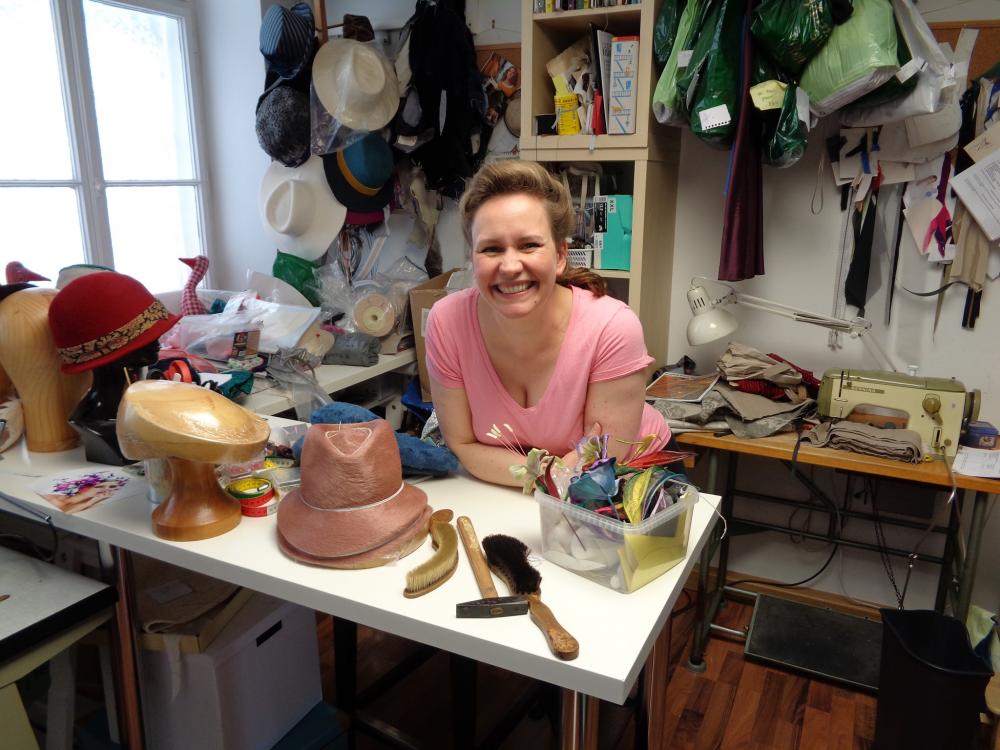 Many think that a hat does not suit them or that they even look ridiculous with it, when actually they are simply not used to wear one. This is the typical problem Christina Lichy of H’attitude is oftentimes confronted with. However, she states, “A hat suits everyone, you just rarely see yourself with it, which is the reason for feeling odd.” With her creative designs and high-quality craftwomanship she succeeded in convincing many people to confidently start wearing hats.

Originally born in Denmark, she has fallen in love with Vienna during her hat making internship at the hat manufactory “Mühlbauer Hutmanufaktur”, which led her to spontaneously settle here. She did not shy away to follow this inner urge, even if she did not speak German or had a plan how to establish her own store by then. Thinking back, she might not act so hasty. On the other hand, she is convinced that it was not too bad being a little naive as this helped her ultimately to be more courageous and not let her head interfere too much. It always has an upside and a downside. Meanwhile she only produces unique pieces on customer’s order in her small but sweet studio in the fifth district of Vienna.

From Early on with Hat

The profession of hat making might seem to be a bit far-fetched in the 21st century, but it is made for Christine. She can hardly remember times without a hat, because there were hardly any. Even as a small child she used to run around in her Danish village wearing a headgear. When I asked her about the reason she started to love wearing hats, she couldn’t tell me at first. In the end she was immediately fascinated right from the start by the versatility of these accessories.

Christina likes to respond to individual needs and ideas, that’s why she lovingly creates their unique pieces – from small to large, embroidered or glittering – but one colour lets her always hesitate for a moment – black. Every now and then she also crafts black models on explicit customer’s request, yet reluctantly. For her taste black is just too dull and doesn’t really count as a colour.

Even if “black” doesn’t appeal to H’attitude, the vintage style makes up for it. The hats are always influenced by Christina’s fashion orientation and preferences that is the style of the twenties. For years she has been drawn to this era, therefore she also designs a good variety for her own private use. Since most hats are now only produced to customer’s request, she has currently no collection to present. It wouldn’t be like she never did that, but Christina has determined for herself that she prefers to produce special unique pieces. Of course, this helps her to stand out in the crowd of other hat makers in Vienna. H’attitude has settled in a niche of arts and crafts with a specific and unique style, which is not to be found a second time in Vienna.

Sometimes it Can Be Fast

If you look at the manufacturing process of a hat, it takes certainly an average of several weeks from the first meeting to the final product, even if it is only a few hours in total. However, Christina often has to order the right fabric first (which can take a few days) and besides it is also always dependent on the weather. In winter, for instance, it takes always a little longer because it is colder.

Step by Step Instructions: The History of a Felt Hat

1. Christina firstly chooses a suitable blank (already felted material) and then puts it in the microwave so that it gets a little “steamy”

2. She then uses her hands to shape the hat in the way she would like it to be.  She puts the felt on a wooden mould. The steam iron does the rest of the work.

3. Then the hat has to dry nicely. In summer, the sunny windowsills are excellent for it. In winter, you can put it on the heating or in front of the wooden stove. (If it has to go very fast: the oven is the rescue, but really only in high need.)

4. Then the hat is taken down from the mould and smeared with a tincture that stiffens the fabric (before that the felt is very flexible).

5. Then everything must be dried again.

6. The hat band is the next part that is sewn onto the hat.

7. The edge is either lined or inflected.

8. The end is then apparently the most creative part of the production, since the decoration elements are added here. It ranges from simple feathers to exiting flowers and ribbons. Generally, there are few hats that really have no decoration element at all.

Her models are very different, creative and colourful. This is the right spot for everyone who is into flamboyant headgear. Occasionally, Christina also makes wedding hats, straw hats or basically everything her customers are dreaming of.